Overriding toString method is necessary even in Java EE. Since, in enterprise architectures, there are POJOs with many attributes.Implementation would become burdensome and straightforward without help of eclipse. Instead of no-brain coding, open your favorite Eclipse IDE 3.7.+, right click on your class, then select "Generate toString()"  as shown below. That's all you have to do, to got a well designed standard toString method. Nice feature after all.. 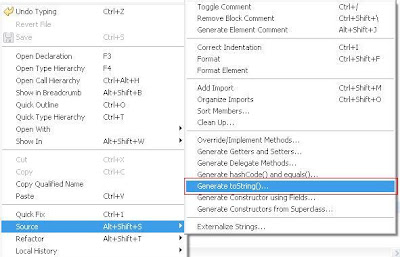 In order to create operating system processes (even another java application), running a command, and defining an environment variable; a simple approach is succeeded by using " java.lang.ProcessBuilder " class in Java . Process process = Runtime.getRuntime().exec("cmd /c java -cp bin B"); BufferedReader inputStream = new BufferedReader(new InputStreamReader(process.getInputStream())); String line; while( (line = inputStream.readLine()) != null) { // inputStream is enabling this thread(main method) // to read "System.out" prints of started process (B.main method) System.out.println("#read from inputStream: " + line); } The above example illustrates how to start a java application from another one. /c option has vital importance since the rest of the parameters that command line is fed to run them properly. java command must be in environment variables to run B (which consists the " main(String[] args) " method) and -cp is sta
Read more